Artist Statement:
Drawn by the rugged beauty that typifies the Canadian spirit, I am compelled to produce things of value, meaning and permanence.

Stephen C. Gaebel (b. 1960) was born and raised in Bancroft, Ontario, a village nestled in the hills of the Canadian Shield in the Algonquin Park region. His family history in this area dates back to the original pioneer settlement of the 1800’s. His earliest memories are of the lakes and forests, out with his father, an avid outdoorsman and trout fisherman. Renowned for its rugged beauty, this was a special place in the hearts of a number of the early Canadian artists, particularly Tom Thomson, A.J. Casson, and David Milne, whose vision and influence are evident in Stephen’s work.

After graduating from high school, Stephen set out with a backpack and in the course of a year and 10,000 miles, traveled throughout Canada, the United States and Mexico. He returned to Ontario in 1980 and studied Fine Art at the University of Guelph.

For 10 years, Stephen fought forest fires on an Initial Attack Fire Crew with the Ontario Ministry of Natural Resources. “It was an extraordinary experience,” he says. “We were flown into some of the most beautiful and isolated regions of the north, establishing line camps on a shore of a secluded lake, working twelve and sixteen hour days for 21 days at a stretch. The money, the adventure, the vast wilderness of lakes, granite ridges and black spruce swamp —it got in our blood, kept us coming back year after year to sign up for another season.”

Returning to school in 1989, Stephen studied commercial art at Fanshawe College in London, Ontario, where he received the Advertising Art Award of Excellence. As a graphic artist and creative director in the years to follow, Stephen worked on a wide array of national and local accounts. “I was one of the guys responsible for the stuff you find in your mailbox,” he grins. “Make no mistake, it was challenging and rewarding work, but in a world of annual reports, monthly newsletters and weekly sale events, there grew a deep longing to produce things of value, meaning and permanence.”

In 2007, Stephen began painting in earnest. His work is characterized by a powerful empathy for the people and the places he portrays and a natural gift to see beyond and touch the essence of  their being. He is widely recognized within Canada for the Fallen Canadian Soldier Project, a series of  portraits of Canadian soldiers who have fallen in Afghanistan. 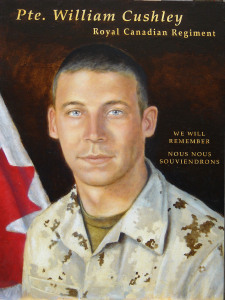 “A landscape or a portrait, they are one and the same,” Stephen suggests. “The fire and the fury, the north wind’s blast, the morning mist mirrored in the stillness of a lake— these things that shape the face of the landscape have also shaped us.”